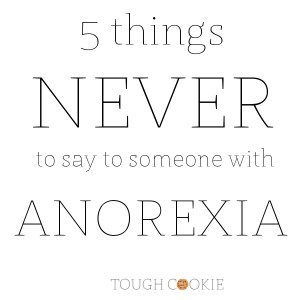 If you’re going through Anorexia at the moment, or have been through it as I have, you’ll probably know that people who don’t understand have an unfortunate habit of putting their foot in their mouth! It’s awful when somebody says something to you which really has a negative impact on your day (or worse, stays with you) whilst you are so poorly – purely because they don’t understand what you’re going through and are ignorant as to what they should say and do.  At best it’s naivety; at worst it’s people feeling as though they have the right to bring you down because they think what ‘you’re doing’ is wrong. Of course they have no idea that none of this is your doing!

I’ve put together my top five comments which just make my blood boil when I hear them. I hope that by sharing these I’ll help you to feel better knowing that even though people say these things, they are not a reflection on you and you should try your hardest not to take them on board on concentrate on yourself because they can harm your recovery. Remember that you deserve to recover and keep focusing on the positive things you want to have in your life and if you encounter one of these people, limit the time you spend in their negative energy.

‘Why don’t you just eat?’ You need to eat’ – ARGHHSGSHDGAjfksfjsj as IF it is that simple. As IF you would put yourself in this position knowingly. As if it’s your fault. People who say this to you have NO understanding of what you’re going through. They see Anorexia as a choice – they don’t feel the strong compulsion not to eat and they don’t hear the cruel voices in your head that taunt you.

‘You’re selfish’ – Again, when Anorexia is a choice, making the person struggling feel guilty seems like a genuine method of turning things around. Of course all it does in reality is make YOU feel awful and Anorexia more angry and determined. You know that what is happening affects the people around you – and you wish it didn’t. What you don’t need it someone pointing that out as if you are deliberately poorly. Remember – mental illness is the same as physical illness – and if it would be unreasonable to accuse somebody with cancer or physical disability of being ‘selfish’ then it is DEFINITELY out of order to say the same thing to you.

‘You used to like that’ – Yeah, I know. Please don’t point it out. One day I may eat it again but I am struggling with a demon in my head which won’t allow me to eat it. Please be patient and recognise that I am trying.

‘You’re VERY thin – you look so ill’ – Yeah I know (again). This comment is annoying for several reasons because no matter how it’s said or who to, it has a harmful effect on the person you’re saying it to. I had (and still have) body dysmorphia when I had Anorexia, so I couldn’t focus on the bigger picture and still believed I was ‘fat’ because I was meticulously measuring parts of my body and scrutinising them 24/7. Nonetheless, Anorexia still lapped up comments like this as compliments which drove it to carry on.  I know that not everybody with Anorexia has BD too, and speaking to those people, it’s clear that on this side of the spectrum it’s still VERY unhelpful. They are fully aware of how they look, thank you very much. They DO NOT need somebody else to point it out.

‘You’re not even trying’ – Again, recovery is partially out of your hands. You are doing as much as you possibly can at the moment – even if it doesn’t feel like it or others are trying to make you feel as if you could be ‘trying harder’. To use the physical example again, if someone accused a person with a broken leg of ‘not trying hard enough’ to fix it, it would be ludicrous. The same goes for you.

I could go on! Have you got any of your own to add?

5 things NEVER to say to someone with Anorexia