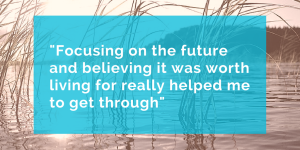 Here is my recent guest blog for fab UK charity SANE, who work to help people living with all kinds of mental illness. You can see it on their page by following this link, or keep reading below.

Anorexia is always shown in a very negative light in the media. Of course it is a terrible thing – a debilitating illness – I know, because I suffered from Anorexia in my teens. But I’m very passionate about being positive about Anorexia – because I did recover – and like many, I was let down by my local health services and providers.

Why do I want to be positive about Anorexia?

No, Anorexia is not a positive thing – but we can be positive in order to reduce the numbers of people losing their lives to the illness year on year. Instead of focusing on the negatives, I want us all to be more positive about Anorexia because I believe that’s the only way people will recover – by showing them it’s possible to recover and it’s worth it – that they are worth it.

If we constantly report NHS shortages, devastating stories about people who were let down, and phony ‘success’ stories which include photographs of desperately poorly people who describe in great detail how they came to be poorly, then we will not beat Anorexia.

I know that in this country and indeed the world over, Anorexia is widely misunderstood even by health professionals, and there are few resources on the NHS which means that an illness thriving on a lack of urgency is left to worsen until crisis point is reached. But I am living proof that Anorexia CAN be overcome even without conventional help – so it’s time we stopped focusing on loss of weight, emaciated figures and size zero and started instead to share the success of real people who have overcome Anorexia and now live free from fear or misery.

What can I do if I am suffering from Anorexia?

If you are reading this blog and are struggling with Anorexia, the biggest piece of advice I can give is to try and remember who you really are. By that, I mean stopping listening to the cruel voice in your head which tells you that you’re not worth it, and starting to take notice of your own inner voice – the voice which talks about all those things you want to do, the places you want to go, the person you want to be. Anorexia takes all these dreams and aspirations away from you – so starting to remember them and getting excited about them is an important first step. If you can do this, and use mood boards and visuals to feel as though you’re getting closer to your goal, the incentive to recover grows. You become distracted by how wonderful life can be, and in turn you stop listening to Anorexia, which tries to convince you you’re better off dead.

I know this is hard – but focusing on the future and believing it was worth living for really helped me to get through – especially on the hard days where I felt as though I couldn’t fight any longer.

What should I do if I want to help a friend or loved one with Anorexia?

It can be incredibly frustrating for people around someone with Anorexia, because you almost feel like a helpless spectator as the battle is waged inside that person’s own head. However it’s really important that they know they don’t have to go through it alone. Even though they have been ‘taken over’ by this demon – they are still in there somewhere, and although Anorexia will tell them not to, they need and want your love and support. Be there for them – and try to recognise what is Anorexia and what is not. For instance, if they fancy going to the cinema, then take them – but if they want to cook you a three course dinner then eat none of it themselves, you should refuse politely and explain why. Anorexia is often harder for family and friends because when you’re in the midst of it yourself, you’re so consumed by it you can’t see the effect it is having on others. Hang on in there and make sure you get some support for yourself so that you’re strong enough to stay by their side.

If you would like more help and advice on Anorexia, you can visit my blog www.toughcookieblog.co.uk, or take a look at my books which were written using my own experience to help others to recover and live the life they deserve to. http://www.amazon.co.uk/Rose-Walters/e/B00YARAPWW/ref=dp_byline_cont_book_1