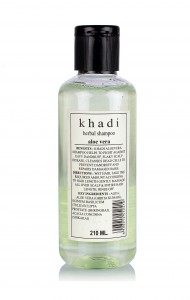 Now, I have to be the first to admit that after a few weeks, despite fabulous results for my hair, the powdered shampoo routine was wearing a little thin. I’m also under a lot of stress at the moment and until that subsides, I know that unfortunately my hair is going to be at risk. When it started falling out again the other week I decided that a) clearly whatever shampoo I use is probably not enough at this time to save my hair and b) why not find something which was still nourishing but less hassle?

Ah, but I’d already tried that before, right? I felt like I’d already trawled Google but I did so again – and this time I used a few different terms and discovered natural brand Khadi.

Khadi hails from India and all products are SLS (Sodium Laureth Sulfate), Paraben and Silicone free. Instead they feature the exact same ingredients I’ve been using on my hair (Shikakai, Amla, Bhingraj) but in a handy liquid-gel formula which is easy to apply, wash out and doesn’t make my hair as tangled afterwards, either.

Word of warning: there’s loads of choice. I’m not good with choice and decisions because of my anxiety so it took me a few days to send off for one! I (finally) chose the Aloe Vera  shampoo – as I’ve heard fabulous things about its benefits for hair.  This shampoo also contains extracts of the Indian herbs mentioned above in addition to pure water and aloe vera.

The shampoo lathers soo well when I apply it that it makes me massively suspicious as to whether the ingredients are as they say they are (paranoid, much?) However on further inspection the bottle does only state that the ingredients listed are KEY ingredients, leading me to then panic about what I have just put on my hair.

Khadi’s website claims all products are free of chemical nasties, but I have emailed them to ask exactly what is in this particular shampoo as others simply say ‘Ingredients’ with an equally short list.

Anyhow, I’m really impressed with the smell, the texture and the cleaning power of the shampoo. As you know I only wash my hair once a week – so I’ve only used it twice now – but I’ll certainly keep you posted as to how I’m getting on.

Has anyone else tried Khadi? 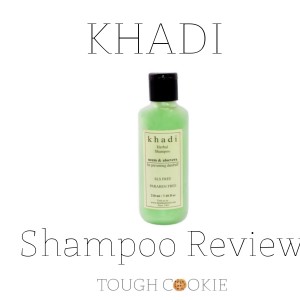