A few weeks ago, I was away on holiday with my family (hence the lack of posts!) Unsurprisingly, the holiday inspired a body-image related post – with an especially unusual name (I bet you haven’t heard those two in the same sentence before). Yes, it might seem like an oxymoron to reference cellulite alongside ‘beautiful’; because we are told that the two don’t mix. We are told that we should banish and eliminate cellulite using expensive creams, lotions and surgery. It is often given unhelpfully negative personifications such as ‘unsightly orange peel’ – so naturally, we want to get rid. We’re also sold this misconception that if we have cellulite, we must be fat. So here I am (cellulite and all) to banish these theories and to prove to you that actually, cellulite ain’t that bad. 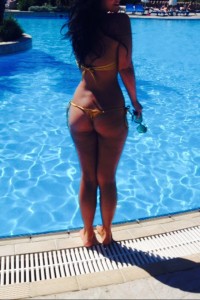 I noticed that throughout our holiday, my mum was especially self-conscious. She seemed to be constantly comparing herself to others and putting herself down.  In the end I found this pretty annoying because really, there is nothing wrong with my mum! But I know it’s something I have done often in the past, so instead I tried my best to support her and help her to feel better.

One of the things she was especially hung up about was her cellulite. Now to me, it really isn’t that noticeable – but to her, it’s hideously obvious and ‘ruins her legs’. Understandably this makes wearing swimming costumes and bikinis a bit tricky – but unfortunately she had little choice in 45 degree heat!

I did my best to convince her throughout the holiday that the cellulite wasn’t really that bad at all – and besides, it only made up a small part of her. Women of all shapes, sizes and ages have cellulite – I have cellulite. It really is very much part of being a woman and something which I can understand people being self-conscious about, but really believe shouldn’t be such a sticking point. We don’t often see super-slender, airbrushed models with cellulite (especially advertising numerous anti-cellulite products which in themselves imply it is something to be banished!) – but in real life, (i.e, on a beach) you see it on nearly every woman. Sitting on a beach of many women, all of varying ages, shapes and sizes, I noted that over 70% had cellulite. Yet they were all individually beautiful! In addition, many of them seemed perfectly confident lying in the sun or splashing about in the sea even though they possessed this ‘defect’. I pointed this out to my mum continually, but it didn’t seem to have much effect.

On the last day, I found a wonderful example which I hoped would change her mind. I’d spotted a beautiful girl being ogled by blokes as she lay on her sunbed – wearing a red bikini with dark skin, waist-length wavy dark hair which shone in the sun with oversized sunglasses shading her eyes. It was clear that she was beautiful, even though she was lying down in the shade. Several hopeful guys sauntered up to catch her attention and try to talk to her within the space of a couple of hours. Then late in the afternoon, she was asked to translate in Russian for the sunbed guys, who were desperately trying communicate with the couple on the loungers next to us who couldn’t understand why they needed to pay. She stood with her back to us as she explained that the sunbeds would cost so many dollars – and as she did I couldn’t help noticing that actually, she wasn’t as slim as I’d had her down to be when I’d seen her on the sunbed from a distance. Standing before us now, I realised that she was actually a size 12 or 14, maybe even a 16, with wide hips and lumpy thighs, topped with a large bottom which was covered with ripples of cellulite. Yet this didn’t detract one little bit from her beauty. In fact, these features enhanced her beauty. She was gorgeous – cellulite or no cellulite.  I watched as she walked back to her lounger and waded out into the sea with her friends. She seemed carefree, happy; unaware of how beautiful she was but completely oblivious to her so-called ‘imperfections’. This was so refreshing for me – and straight away I pointed out to my mum how beautiful she was – to which mum agreed. Then I asked her if she had noticed her cellulite. She said she had – but that it hadn’t changed how beautiful she was. So then I turned it round for her and asked – ”why should it make any difference to your beauty, either?’

In Tough Love I talk about how we see others differently from ourselves – and this is most certainly an example of that. We tend to see the merits of other people before we see our own – or worse, we don’t see anything positive at all when we look in the mirror. But actually we fail to see when we have positive things which reflect in others – and the so-called ‘negatives’ which we have come to believe are embarrassing or defective parts of us because of harmful outside influences are magnified in ourselves but ignored when we look at other people. It’s holiday season – so try to be kind to yourself and remember that you are beautiful just the way you are – no matter what you may think is ‘wrong’ with you.

Enjoyed Love Your Cellulite? See more like this in my book here.