This is a huge step in the right direction – and proof that it CAN be done! Tying into my campaign for transparency in Photoshop, I wanted to highlight the fact that Israel has been inspirational in leading the fight against unrealistic role models. In March last year, Israel passed a law which banned the use of underweight models in advertising, and also stipulating that publications state when images have been photo-shopped to make the girls in them look thinner.

In addition to this, models need to prove that their BMI is healthy before they are legally allowed to work. This has to be signed off by a doctor.

Isn’t it strange that in the UK, where everybody appears to be so concerned about the increase in Eating Disorders and Body Dysmorphia, that we adopt a policy that is an exact opposite? Models are frequently told they are ‘too big’ and ‘need to lose weight’ – a message which permeates through society and ultimately translates into a feeling of inadequacy amongst women.

Vogue Worldwide have had their ‘Health Initiative’ in place for a couple of years now, which promotes the use of healthy models in their publications. Below is a cover from Laisha, one of Israel’s leading women’s magazines.

What do you think? Should we start a petition for Photoshop Transparency? 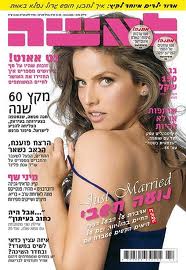